By Gil on March 26, 2020 in Blogging, Magazine Articles, Portfolio 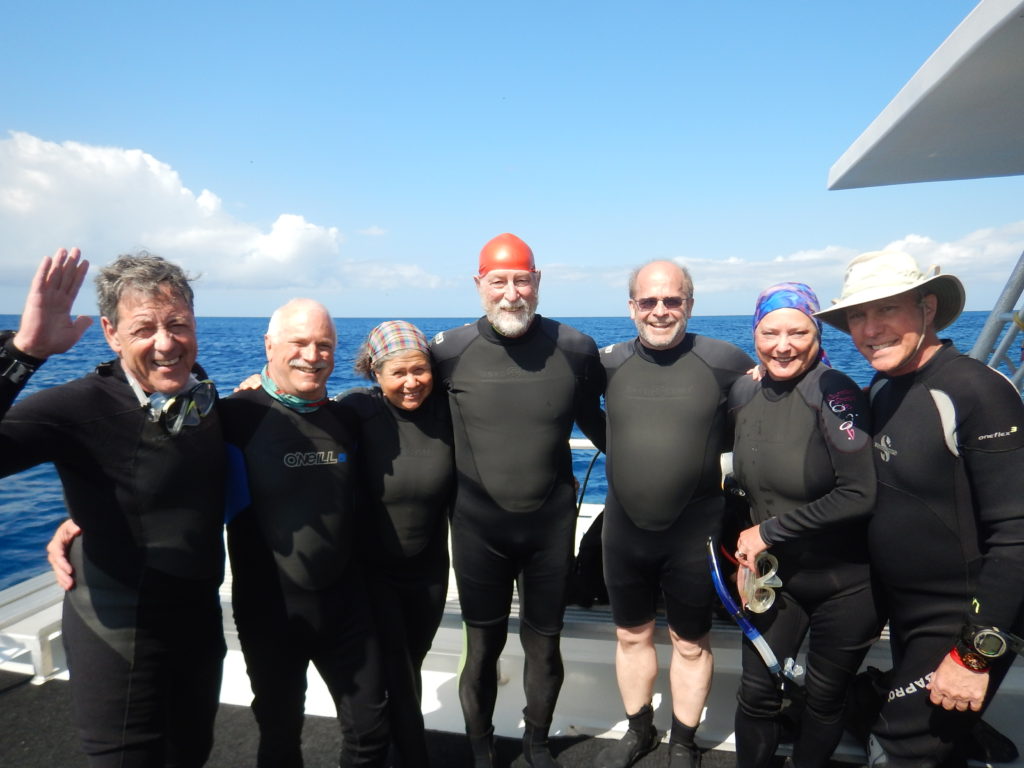 Ten senior members of the Marin Dive Club just completed 170 dives at Little Cayman Beach Resort. Despite prescription masks, a few equipment problems, and other Senior Underwater Moments. Our average age is 70 and the median number of dives was 400. Our advanced ages don’t stop us from diving all around the world.

Did you hear the one about the older diver who put on his wetsuit backwards and misplaced his camera in a buoyancy compensator (BC)? That would be me while scuba diving with the oldies.

While on a dive trip with 10 members of the Marin Scuba Club from the San Francisco Bay Area to Little Cayman Beach Resort, we overcame a few issues and thoroughly enjoyed our experiences despite our age. In fact, one member of our club is 91 and still dives whenever he wants.

One member on this trip said, “Once you’ve done over 100 dives, you’ve pretty much experienced everything that could happen underwater, so you’re more relaxed and more aware of your circumstances than less experienced divers.” How true, but here are a few things that did happen. 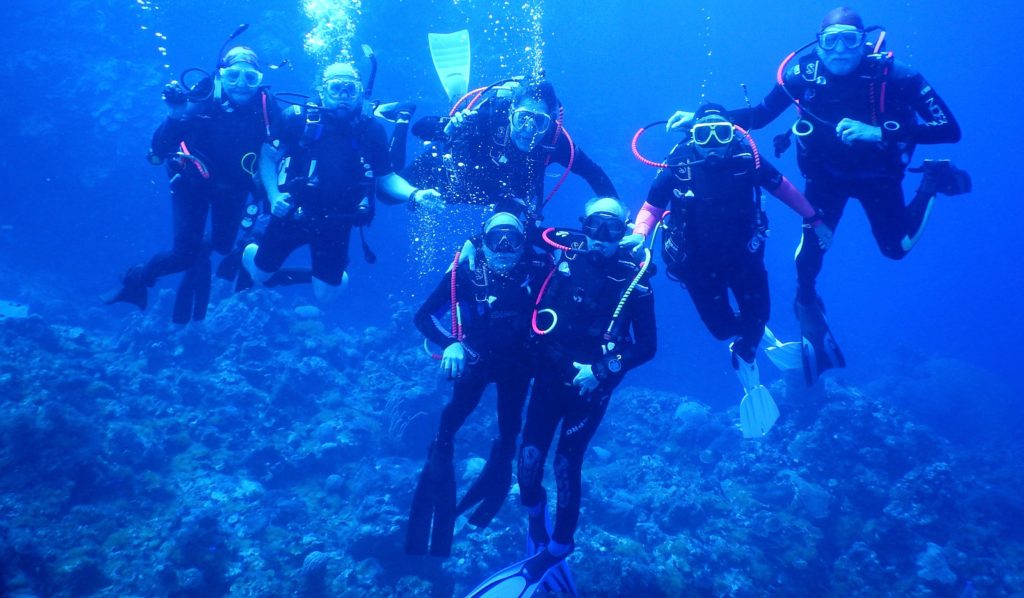 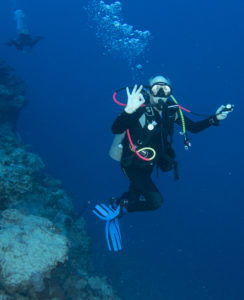 A Reverse Fashion Statement.
In my excitement to get wet after nearly three years between dive trips, I just pulled on a rented wetsuit and zipped it up under my neck. After all, my nylon dive skin that I wear underneath for an extra layer of warmth zips up the front.

Though the wetsuit didn’t fit perfectly, I marveled at how easy it was to zip it compared to fumbling around for the extender normally dangling down my back.

However, on the second day, my divemaster gently reminded me that I may be wearing it backwards. That’s when I remembered that the wetsuit had knee pads in the front and the zipper should be in the back! It actually then fit better –– especially around my crotch –– and I was no longer a public embarrassment. 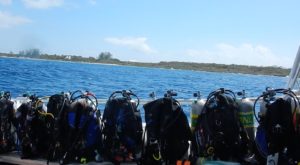 Camera Lost –– and Found.
The next day, I brought my underwater camera aboard that can take photos and videos down to 100 feet (about 30 meters). I snapped a shot of our dive plan’s white board for posterity and secured my camera in a velcro pocket on the right side of my BC. After I took a giant stride into the 80-degree water and descended to 40 feet to meet my group and divemaster, I reached inside my pocket… and found nothing. I looked in my left pocket – also empty. I looked below in the sand – no camera.

It wasn’t until I was back on board an hour later that I realized I had put my camera in my neighbor’s BC which looked identical to mine since they were both rented from the resort’s dive shop. Then I recognized my number (51) on MY BC and his number on his. I will never make that mistake again, either.

But overall, between all of our collective 170 dives that week, we saw reef sharks and barracudas, petted nurse sharks, quickly snapped images of poisonous lionfish, viewed the largest lobsters I’ve ever seen that were not accompanied by a bowl of clarified butter, witnessed sea turtles gnawing on sponges, and documented it all with three photographers. 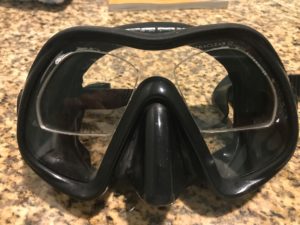 Underwater Prescription Vision.
Because I’m nearsighted and don’t wear contacts, I’ve had prescription dive masks since 1985. Some of my dive buddies even have bifocal lenses ground into their masks.

This helps us have 20/20 vision down below where it’s especially important to see if a shark that’s slowly approaching you is a dangerous one (great white) or a docile one (nurse shark).

A guy I meet about 30 years ago on a trip to Baja California actually had a pair of glasses –– without frames –– stuck to the inside of his mask with part of a wire coat hanger and a small suction cup. They rested on his nose despite the rusty hanger; he was too cheap to buy prescription lenses. 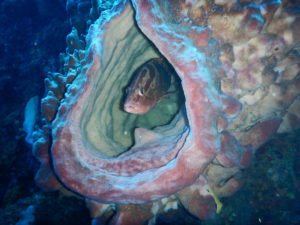 I Haven’t The Foggiest Idea.
The problem with my new mask is that it kept fogging up on the first few days because of the coating and glue used on the inside of it. After scouring it with SoftScrub, using Anti-Fog drops and a spray of Johnson & Johnson’s “No More Tears” Baby Shampoo, my fogging problem was solved.

After that, I could see fish inside sponges and other beautiful underwater creatures that I’d been missing 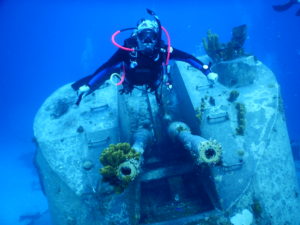 Not Pushing My Buttons.
We descended about 90 feet to a 330-foot Russian frigate that was deliberately scuttled years ago and sunk as a wreck off of Cayman Brac, a neighboring island, to create an artificial reef. I asked my dive buddy to float above the two sponge-encrusted cannons that were still aboard and I captured a few images of him. Then, I used hand signals to ask him to snap one of me in the same place.

He appeared to take several shots of me there, but once we got back on board, I couldn’t find them. He had been pushing another button on the back of the camera, not the shutter on top of it so I didn’t get the photo of me that I hoped for. Ironically, he has the same camera and thought it was different on mine. 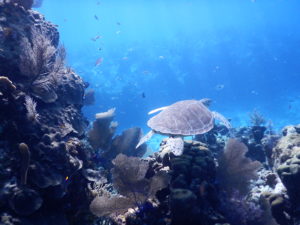 Disappearing Act.
On our final dive, seven of us descended and waited for the divemaster to join us. He took a look at our group, held up six fingers, and shrugged. My dive buddy spelled out the name of the missing diver who had jumped in first, and had a habit of cruising along the reef on his own. We later found him and he was quite nonchalant about his “freelancing”.

He later told us that on a dive trip a few years ago in Southwest Asia, he had actually completed his dive and climbed aboard the wrong dive boat – which was adjacent to his. Just another senior moment when diving with the oldies. 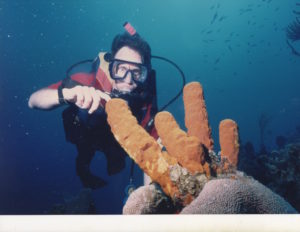