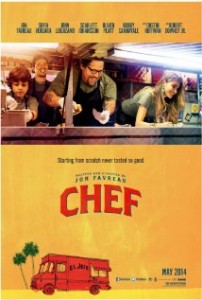 “Chef”, a new movie written and directed by Jon Favreau of Swingers and Ironman fame, takes social media up a few notches from other movies I’ve seen.

First, an L.A.-based celebrity chef played by Favreau gets a horrible review from Ramsey Michel (played by Oliver Platt), the area’s most heavyweight food critic, who loves to eloquently slaughter the reputations of people like Chef Carl Casper in his widely read column.

Second, after reading the very depressing review, Casper asks his 10-year-old son to sign him up for a Twitter account. The Chef then thinks he’s sending a PRIVATE message to the reviewer. But, of course, he sends him a flaming retort that hundreds of thousands can read.

Third, when the reviewer comes back to the restaurant once more to try what he’s been told via Twitter is a bold new menu, owner Dustin Hoffman tells the Chef that he can only prepare his tried-and-true favorites that a sold-out clientele is hungry for. So when the reviewer is still disappointed, Chef Casper verbally goes off –– and is captured by smartphone videos that go viral. That’s when Chef Casper’s Twitter account skyrockets to over 200,000 followers.

Fourth, when Chef Casper and his son fly to Miami to buy a food truck that they can drive cross-country back to L.A., the son uses Vine, Facebook and Twitter to build an instant audience in town after town on their way west.

Great script. Excellent acting. Marvelous music. I strongly recommend you seeing “Chef” at a theatre near you. I also love the way the movie shows the Tweets on screen as they’re composed and sent.