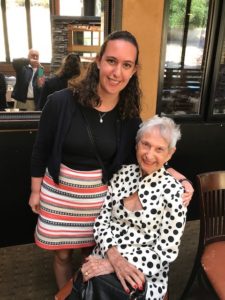 Sara Zeimer, Pearl’s youngest of five grandchildren, with her “Baba”.

The publicity just keeps piling up for my Mom’s 100th birthday. I had sent a blurb to the Marin IJ about her centennial and their reporter for Greenbrae, Kentfield, and Ross, Mary Enbom, reached out to interview me for this story that appeared on Thursday, September 7, 2017:

Her secret to longevity?

“I say there is no secret,” she was quoted saying when she was a spry 98. “I just take good care of myself and eat right. I don’t eat junk food. I don’t get take-out. I cook. I just have a good attitude about life.”

Her son, Gil Zeimer of Tiburon, chalks up his mom’s long life to feistiness and strength, despite weighing 100 pounds most of her life. “One of her brothers survived the Death March of Bataan during World War II and she had to be strong for her parents during those years when they didn’t know if he was dead or alive,” he said.

Eating healthy, reading prolifically and guzzling three glasses of milk a day also helped, he said. “She has the bone density of a 30-year-old.”

She does drink wine, but only a little. In fact, the only time Gil, 68, saw his mom tipsy was about 50 years ago in Palm Springs. Lucille Ball happened to be at the next table.

How My Mom Survived, Thrived and Is Still Alive at 100
My All-Time Favorite Copywriting Headlines