My mother, Pearl Zeimer, hit the century mark this week. Here’s the photo I submitted to “The Today Show” and they put it on a Smucker’s label. (A friend now calls this “Pearl Jam”.)

Naturally, my brother, sister and I hosted several parties for our Mom with our family and long-time friends to celebrate this momentous achievement. The City of Larkspur and the City of San Francisco honored Pearl with a Proclamation and a Certificate of Honor, respectively.

And we have more social engagements spread over the next few months to further commemorate this milestone. 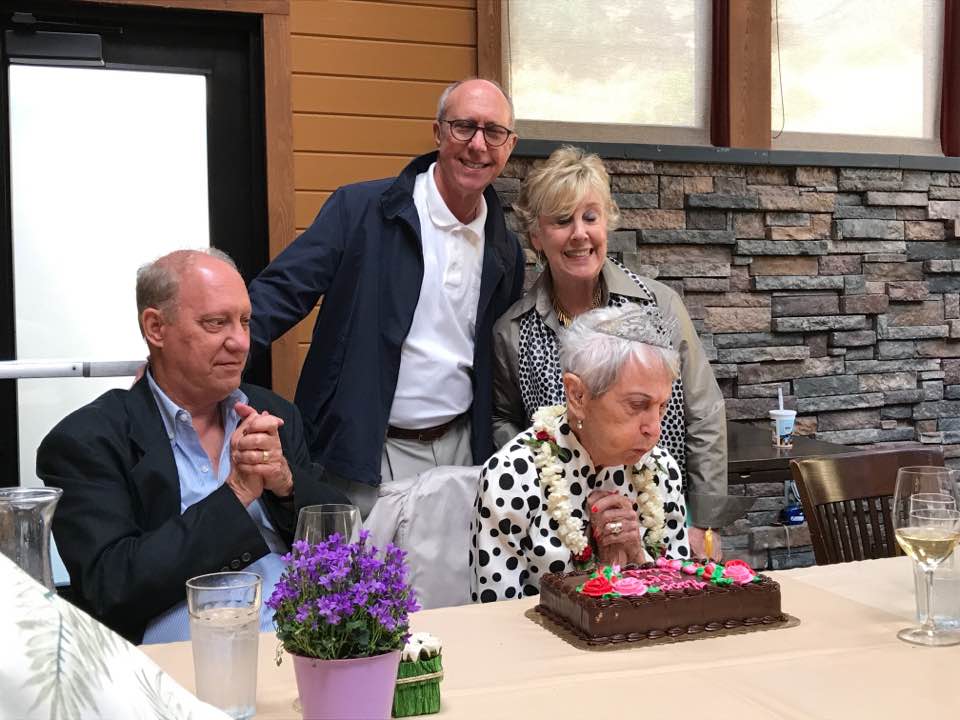 Meanwhile, there are nearly 500,000 people aged 100 or more around the world, and that number is projected to grow eightfold by 2050. 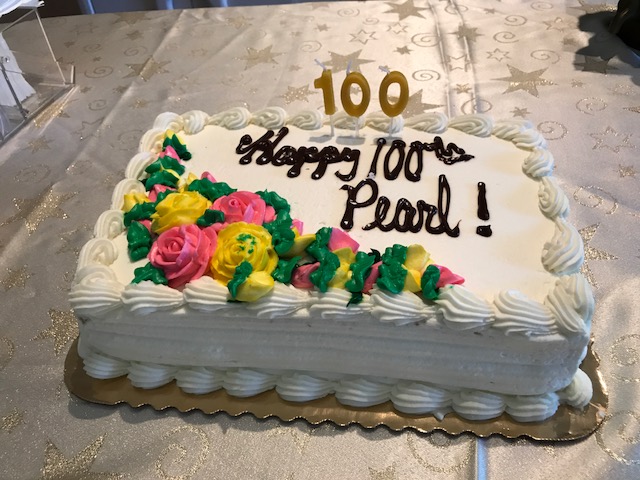 Why Do Some People Just Live Longer?
When my father, my father-in-law and an uncle all passed at age 89, I thought that they had lived rich, full lives. So what did my mother do that they didn’t?

In fact, she hasn’t had a major trauma in her life, no broken bones, or any major illnesses except for a few bouts of pneumonia. The last one at age 75 helped her quit her smoking habit that started 60 years earlier.

The only operations she ever had were an emergency appendectomy around age 10 and a hysterectomy over 65 years ago. 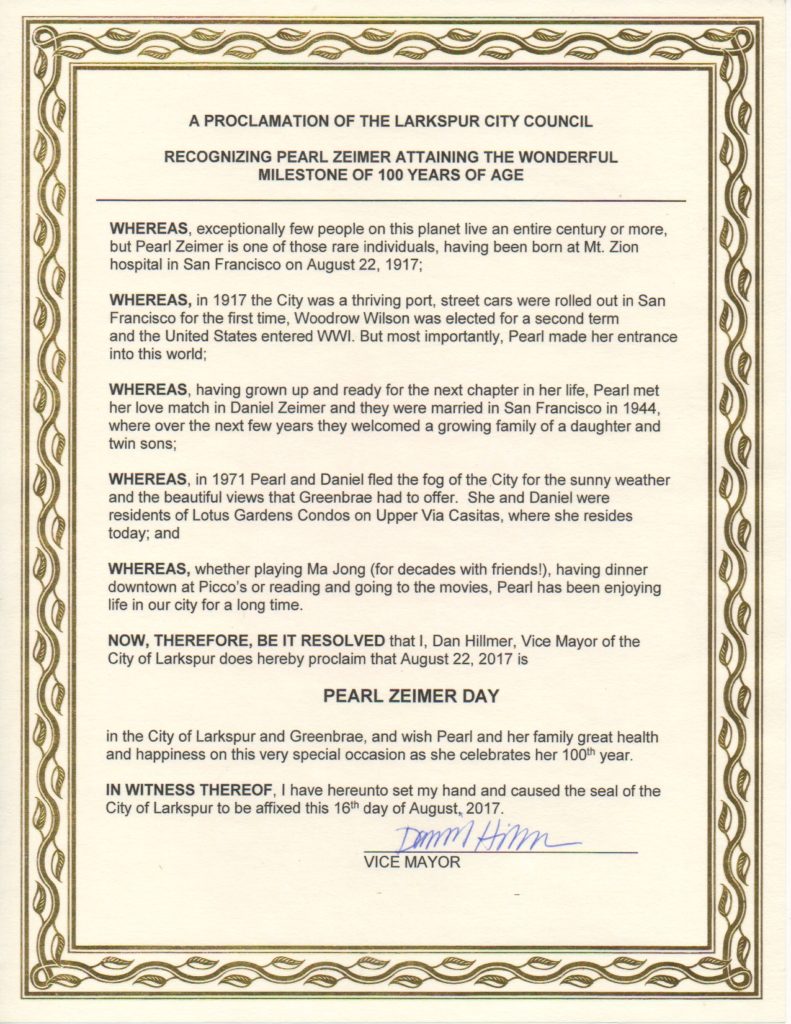 No Worries.
Ironically, when I was much younger, Pearl seemed to worry about everything and anything about her three kids.

A couple of examples:

When she was pregnant with my brother and me, she had only gained 18 pounds. So when she was in the hospital and was able to deliver, the doctor said, “You’re having twins!” She yelled, “I can’t have twins! My house is too small.”

When my brother and I were about 10, we wanted to sleep over at our neighbor’s house, literally two doors down the street. At first, our mother forbid us to go out because of a winter storm. When we convinced her that we would survive a little rain, she made my brother and I promise to call her after we arrived safely. We did.

That rule of thumb was applied by Pearl for decades whenever I told her I was traveling somewhere on business, on vacation, or even just driving to San Francisco for a meeting. She must have said this hundreds of times to me and my siblings: “Drive carefully and call me when you arrive so I know you’re safe!”

About 10 years ago, a huge storm knocked out power in most of Marin County. She called me on her cell phone to tell me her lights were out. When I offered to pick her up and drive her to my house to sleep, she said, “That’s OK. Don’t worry. I’ll just sit here alone… in the dark.” Before we could finish the call, the power came back on, so she sat there alone… in the light.

Now, because of short-term memory loss caused by a brain trauma from a fall a few years ago, she doesn’t seem to worry about anything anymore.

That alone is a great recipe for long life and vitality. 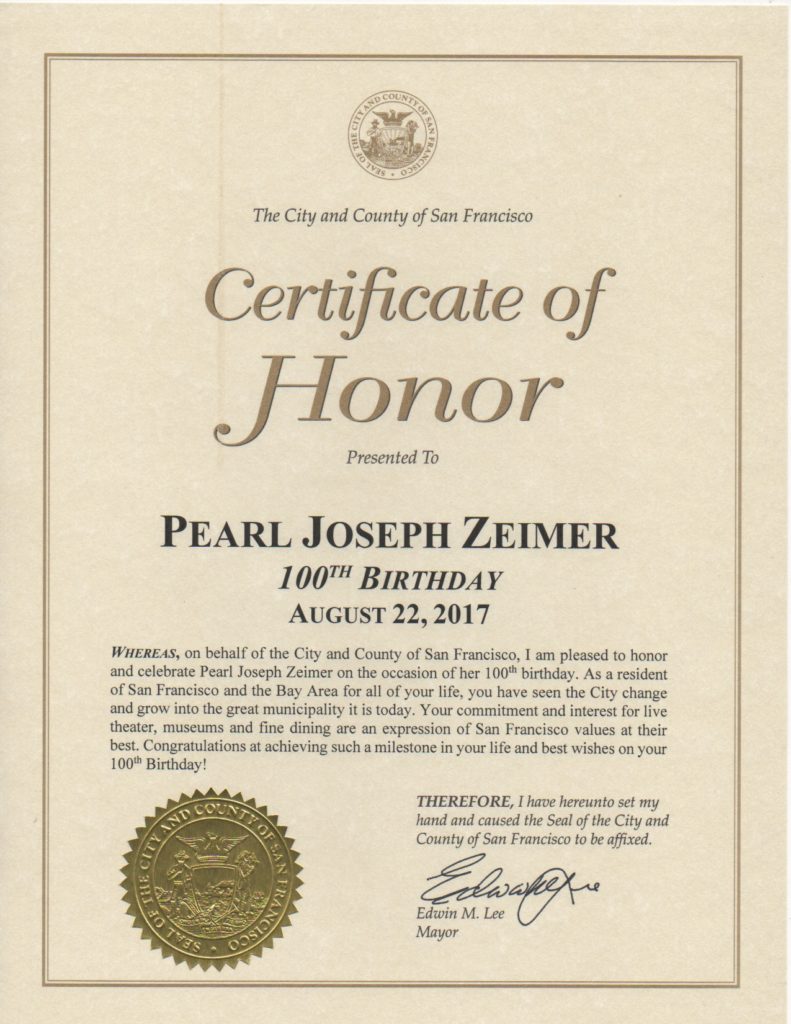 You Are What You Eat – And Drink.
Pearl maintains a very healthy, balanced diet with a minimum of red meat, a good amount of leafy greens and vegetables, three to four glasses of milk a day, and a few scoops of ice cream for dessert.

She only carries about 100 pounds on her 5-foot frame.

She drinks alcohol in moderation; a glass of Prosecco or wine is about all she can handle. I’ve only seen her tipsy once when we were in Palm Springs about 50 years ago. Lucille Ball was at the next table and Pearl slurred, “Hey Lucy, I think you’re terrific!” Ms. Ball just rolled her eyes and looked away.

A Minimum of Exercise.
When she was still driving (up to age 97, by the way), just about the only exercise she got was returning shoes to Nordstrom’s or shopping for groceries.

She once took golf lessons and the pro said, “Don’t bother buying clubs.” She was in bed for a week after dozens of swings and misses trying to hit the little white dimpled ball.

The same thing happened after one piano lesson, but our father Danny could play by ear.

Today, she just walks around her condo, to the car to see a movie, to dine at a restaurant, or to Palm Desert with my brother for a vacation a few times a year. 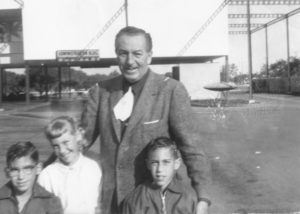 One More Anecdote: “Disneyland Was Not My Cup of Tea”.
I’ll always remember the day we went to Disneyland when I was 7 and we actually were lucky enough to meet Walt Disney in front of his hotel.

Looking back at this photo that was shot 61 years ago, I don’t see Pearl. I thought she was still in her room getting ready.

But when my sister asked her about where she was that day just a few years ago, Pearl said matter-of-factly, “Disneyland wasn’t my cup of tea, so I went shopping with a girlfriend all day in Beverly Hills!”

An Active Mind.
Pearl used to be a prolific reader, knocking off a book every few days, as well as the newspaper from cover to cover, and playing Mahjong several times a month to keep her mind active.

Sadly, now she can’t even remember what she had for breakfast, or even if she ate breakfast.

But Pearl is happy to watch TV, go to a movie, or talk with her friends and family.

So if you want to live to 100 like my Mother, eat well, have a drink or two, exercise daily, keep your mind active as long as possible, and don’t worry about every little thing!

PS: This is a link to a beautiful video that my brother-in-law Jonathan created. 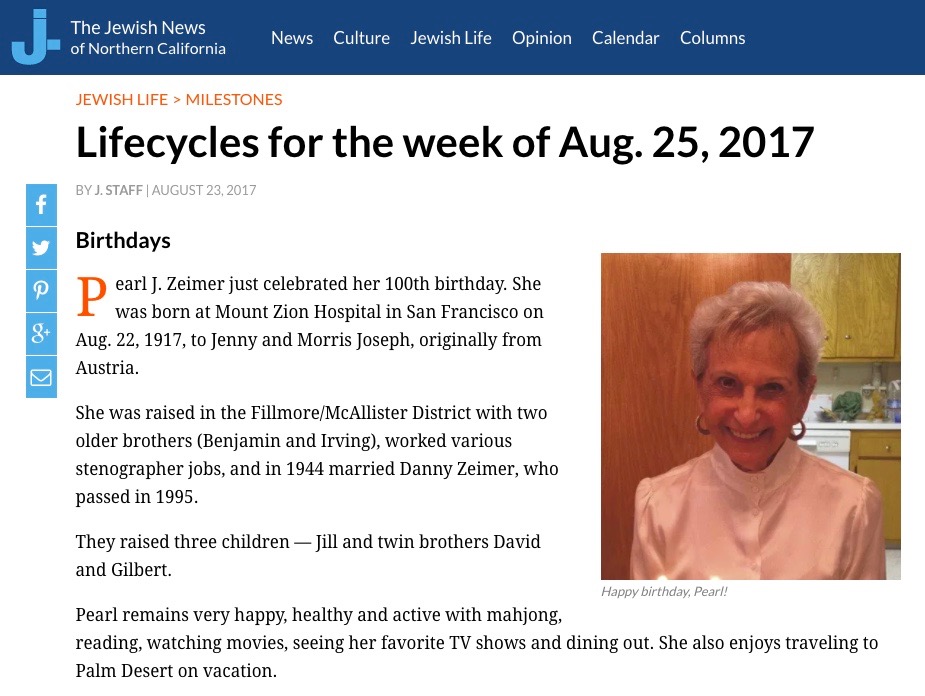