On June 26, a dozen Marin Scuba Club members and friends suspended reality to see this movie about two young sisters who go shark diving in Mexico.

I noticed just a few things that weren’t kosher. First, the captain asked them, “You do know how to dive, don’t you?” but didn’t ask for their C Cards.

Second, amazingly, no dive master accompanied them even though one of the young women had never been diving before.

Third through seventh: The boat was deplorable, the shark cage was rusted, the winch was even worse, the captain said that if they came up to the surface too quickly, they’d get the bends with nitrogen bubbles in their brains (but most occur in your blood vessels or your body), and there were dozens of other problems that were literally off the (dive) charts.

But it was entertaining.

I polled a few of the moviegoers –– all extremely experienced divers –– to gauge their responses. 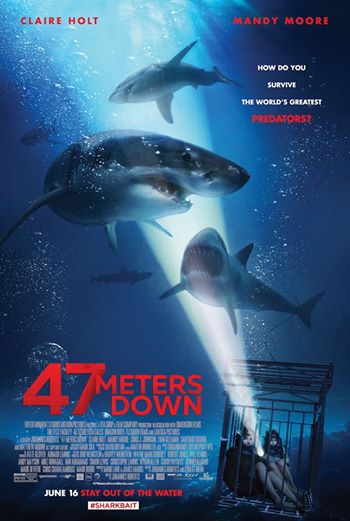 Ken Carter: I’ll play along with this edition of Mystery Scuba Theater 3000 (psi). Let me do my very best Star-Trek-fanboy-nerd take down.

I am not sure where to start, or where to finish for that matter.

So, let me start with the gauges. First, Kate has hers correctly routed to the left, while Lisa has hers incorrectly around her right side. The digital pressure gauges are a total work of fantasy. Who in this day and age would create a digital SPG that does not contain a dive computer or at least some form of bottom timer?!

I am willing to suspend my disbelief and assume that you can lower tanks down and further that an untrained diver can switch DIN fittings underwater without flooding the regulator and while holding one’s breath. What I can’t believe is that you can do that with the goddamn DIN-to-yolk adapter still in the goddamn valves!

After sitting on the bottom for half an hour, Javier finally swims down to help. He hangs out in midwater for another half hour. The women can see his dinky little 8 C-cell light but he can’t see their 4, apparently battery-powered, only automatically activated in 47 meters, lights on the cage? Same deal when Lisa swims out to get him.

And another thing: They go out on the crappiest boat in the Northern Hemisphere with the rustiest shark cage and junkiest winch in the world, but they have tens of thousands of dollars worth of commercial-grade comms gear. Oh, and the skipper is doing the charter for four divers, none of whom are paying full fare. And yes, it is a charter, not a regularly scheduled outing, creating a higher legal standard of care.

About those masks, there are no nose pockets to reduce CO2 build up. Of course, like all dive and space movies, they have subtle little lights to show the actor’s faces.

The pressure in the tanks is another sticking point for me. The pressure drops from 200 bars to 30 or 50 bars in a matter of seconds, but the remaining air lasts for 30 minutes. When they get down to 1 bar, it simply does not make sense. The internal working pressure of most regs is about 185 psig plus ambient pressure. At 47 meters, ambient pressure is about 6 bars. So, to get the equipment to work at all at 47 meters DSW, you need about 18-20 bars (~300 psi) in the tank.

Finally, what jerk thought to say “don’t swim up”? Getting bent is a heck of a lot better than drowning. Hyperbaric injuries are treatable. Death, um, not so much.

The redeeming item of the movie: it encourages people to use DIN fittings and the metric system.

Larry Clinton: I’m quite sure I heard one of the sisters (the survivor, I believe) refer to a scuba tank  as an oxygen tank. Tsk! Tsk!

Bryan Eckert: I’m not aware of any wireless technology that allows divers to communicate with each other underwater unless there are underwater speakers and microphone. Not sure if they would have worked as depicted.

Virginia Bria: First of all… what operation lets non-certified divers get in a cage with white sharks? (some stupid operator in Mexico?)

What woman is willing to risk her life to impress an estranged husband to make him jealous? Answer: only dumb ones in stupid movies!

What operation lets divers go barefooted and with their ass and extremities hanging out of their bathing suits showing skin in a shark cage? Answer: Hollywood sexist movies, he he.

I have to admit, though, the fantasy use of the BC to lift the cage and other amazing feats by a non-certified diver made it look as though these gals could act fast with 1 bar of air left in their tanks, not sure I could do that after 40 years of experience diving!

The list goes on, but great fun to watch what Hollywood can pull off and get 12 of us to see it, ha, it was fun to laugh at the absurdity of bad diving movies…

What I learned from the movie: I will remember to bring my spare “oxygen” tank the next time I go diving!

Marc Paris: Agree with lack of nitrogen narcosis; no way she could change the tank; but most importantly, they didn’t cast Bruce from “Jaws” in the lead role.

Mike Ralston: How Lisa (the one who got narked and ultimately survived) switched first stages from one tank to the other (with no prior diving experience or instruction) was beyond belief.

Elliott Zalta: What I hated most was them producing and distributing it!

Bill McDonagh: Oh how I hate thee!  Let me count the ways…

So that’s our collective feedback. If you’re a diver, you’ll shake your head but enjoy it. If you like sharks, you’ll love it. But if you’re afraid of sharks or what can happen deep under the surface, save your money and skip it.

Ironically, the author will be moving to Tiburon, CA in July. “Tiburon” is Spanish for “shark.