By Gil on February 16, 2018 in Newspaper Articles, Portfolio

I’m proud to share these 19 stories I wrote as the “About Town” Community Correspondent for the Marin Independent-Journal between October 2017 and March 2018. It focused on some of the people in Belvedere or Tiburon who were interesting, had an unusual hobby, or just seemed like a good fit for this column. 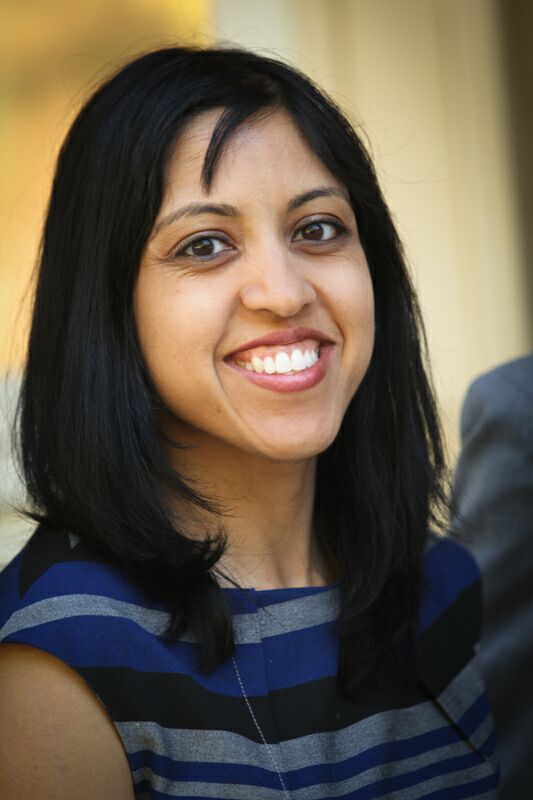 Meet Tiburon resident Dr. Sujoya Dey, an electrophysiologist at Cardiovascular Center of Marin in Larkspur, who has a big heart — metaphorically speaking.

She performs cardiac ablations and installs pacemakers in patients who have heart rhythm problems, two low-risk, non-surgical treatments that offer a high rate of success.

But “beyond the hospital and carrying those patients in my head,” she’s a mother of a 9-year-old boy and 8-year-old daughter. Her husband, Dr. Arun Raghupathy, is a cardiologist, too. Read more. 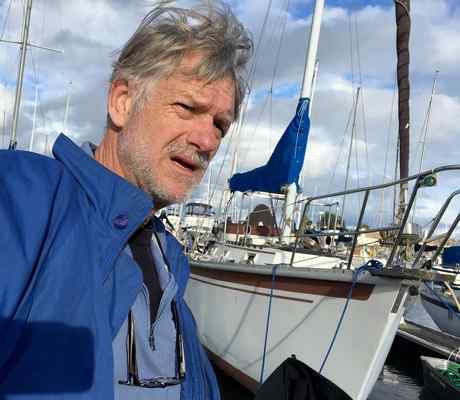 Barry Smith opened his Tiburon Gallery in September 2017 part-time with a goal of living here full-time by spring. All was going well until he needed open-heart surgery Thursday at Marin General. He hopes to be back to work soon.

“I’ve had a long history of heart problems,” he said. “Maybe a triple bypass will give me another 20 or 30 years.”

Smith, 62, has been in the art and framing business for more than 30 years. He’s owned and managed galleries in Los Angeles, Sacramento and now Tiburon. Prior to that, he ran art galleries and frame shops for Tower Records for a decade in Sacramento and Sherman Oaks. Read more. 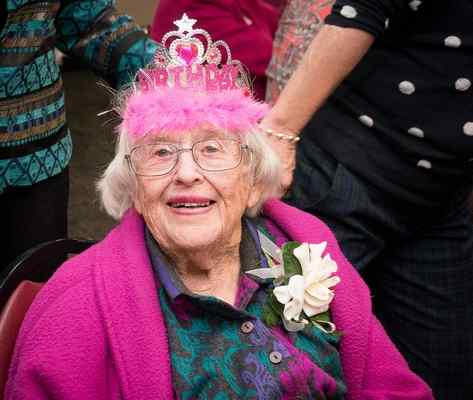 Born in Chico 12 years after the 1906 San Francisco Earthquake, she earned her college degree in education from Chico State University in 1939, then started teaching first, second and third grades in Susanville, Weaverville and Sierraville.

To escape the Chico heat, Wosser would spend her summers at her aunt and uncle’s Belvedere home. There, she met her future husband, Frank, better known as Jake, whose family dated back three generations on the lagoon.

“Things were different then,” Ruth Wosser said. “Cows from the dairies would graze near our home. The old North Pacific Railroad would chug right by our house and blow its whistle.” Read more. 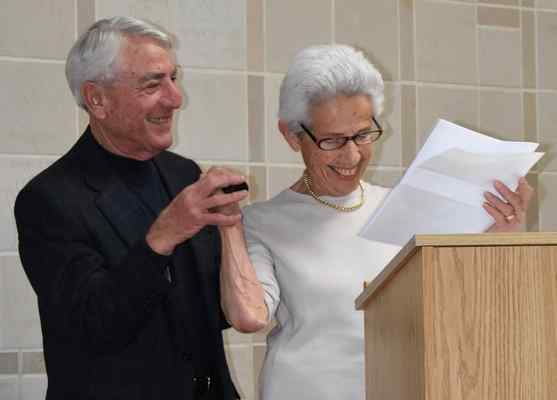 Over the course of four decades, Glenn and Gaby Isaacson have volunteered for a variety of Belvedere causes.

In fact, Glenn has donated so much project management time since the 1990s for Belvedere-Tiburon Library expansion plans, “I’m sure his collective gift of time has topped $1 million,” says Librarian Debbie Mazzolini. But that’s not all.

The Isaacsons — feted at the Belvedere Community Center earlier this year as Belvedere’s 2017 Citizens of the Year — are active in the Belvedere Lagoon Property Owners Association and the Citizens’ Flood Zone Committee. Read more. 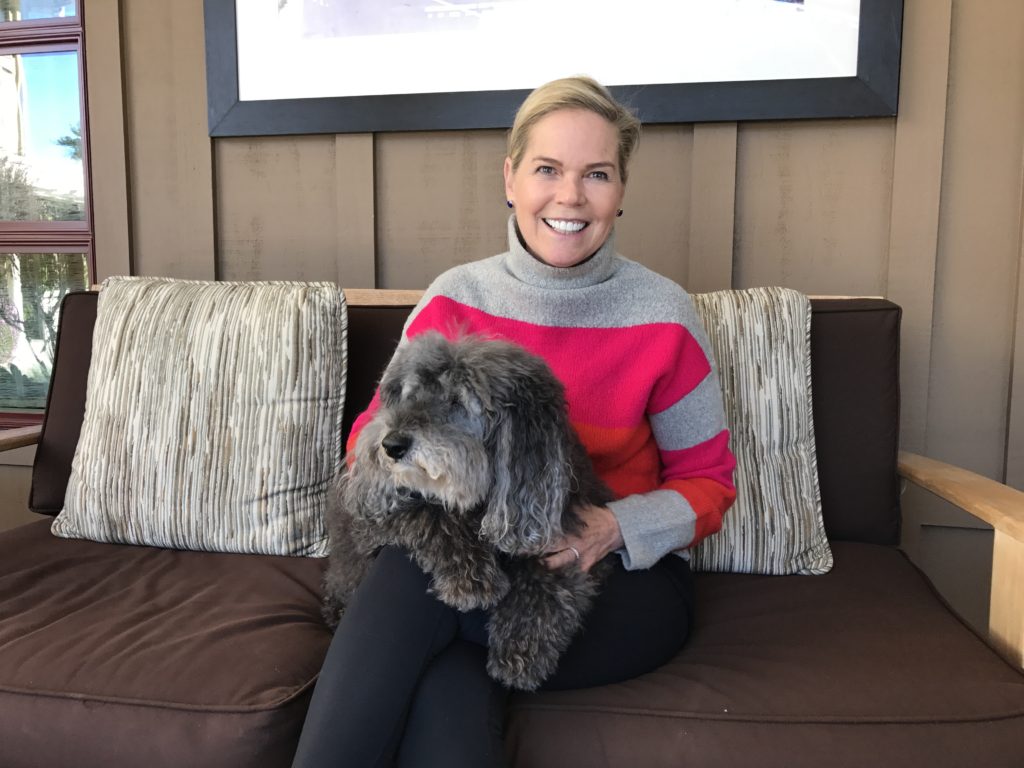 Pam Krueger is all about money. She’s been a Tiburon resident for more than 26 years, co-host of “MoneyTrack” on 250 PBS stations and a national spokeswoman for the Institute for the Fiduciary Standard, a nonprofit that promotes financial transparency — that advisers, brokers and insurance agents offering investment advice behave as fiduciaries.

She’ll partner with investment adviser Tim McCarthy on Tuesday at the Belvedere-Tiburon Library to explain the steps you can take to protect yourself from poor or conflicting advice when hiring a financial adviser. Read more. 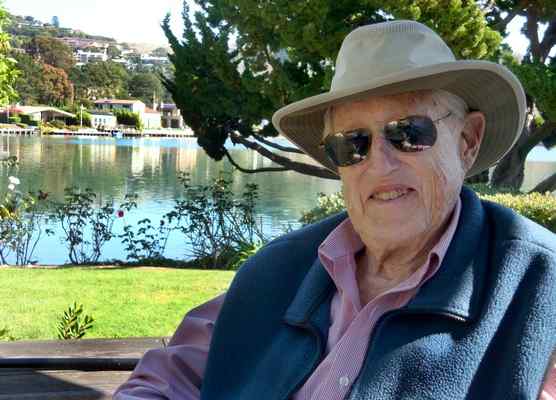 Jim Levorsen was an architect and artist who lived in Belvedere for 50 years before he died in 2012 at age 83. But his artwork lives on, and will soon be put to a good cause.

“As an artist at heart, my dad started taking art lessons when he was 8 in Oklahoma,” said his daughter, Anne Levorsen Hammer, 60, of Denver and Belvedere. “He loved the Belvedere-Tiburon Library so much that he wanted my brother (Mark Levorsen) and me to donate most of his watercolors to their Gently Used Art Auction.” Read more. 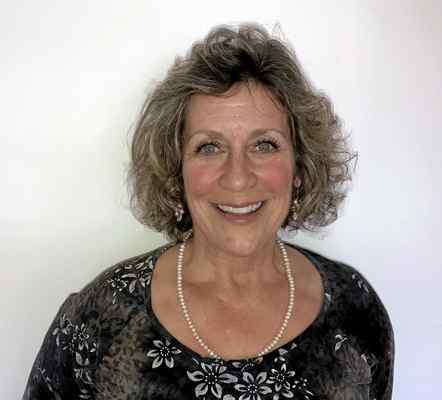 Christine Stephens, 54, is energy personified. As a gymnast for 13 years at the elite level and a coach for another 11 throughout the East Bay, she’s broken an elbow, both ankles a total of five times and even knocked herself out after a dismount gone wrong.

So perhaps it makes sense that she eventually became a certified master massage therapist, first in Danville, then managing her own practices starting in Antioch in 1989 and now in Tiburon, where she landed in December.

“Because of my injuries, my chiropractor recommended that I become a massage therapist,” Stephens said. 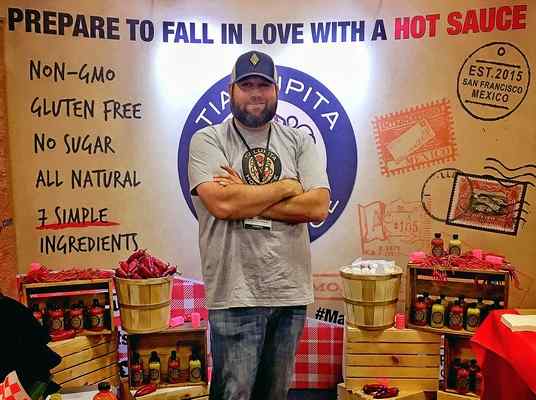 Hector Saldivar grew up in northern Mexico but moved to Tiburon three years ago from San Francisco. His mother — affectionately known as Tia Lupita — was proud to have perfected a hot sauce recipe, carefully handed down over many generations.

“Every time I went back to Mexico, all my friends yelled, ‘tell your mom to make me a bottle of hot sauce. I’ll pay for it,’” Saldivar said. “But again and again, she stubbornly chose to only make enough for family and friends.”

When Saldivar moved from Mexico to Sacramento 13 years ago to work for a start-up company, his mother would ship him bottles of her hot sauce to make certain he always had a supply. Soon, those packages became eagerly awaited deliveries as even more friends discovered it for themselves.

“When I visited my mom in June 2016, I finally asked for her blessing to bottle it for all to enjoy,” Saldivar said. Read more. 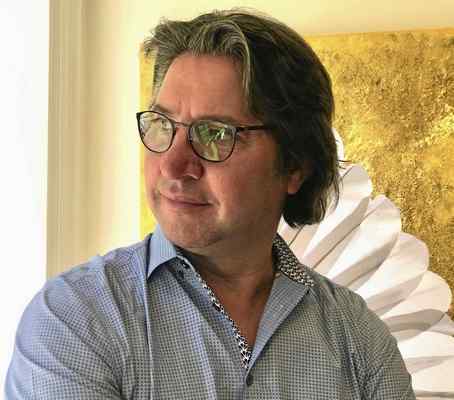 Flock is an art gallery that opened last July after four months of renovation. It was created by Tiburon resident Robert E. Stevenson — an artist, photographer and conservationist — to share his life-long love of nature, art and people.

Like his namesake, Stevenson, 49, was born in Scotland. His early career focused on becoming an award-winning video game artist and designer. Next, he thrived as a successful entrepreneur.

But recently, he rediscovered his childhood love of the outdoors through birding. “It reconnects me with nature, making me feel inspired, present and energized,” he said.

“I believe birding is one of the best-kept secrets on Earth,” Stevenson added. “I love blending fine art with photography, merging acrylics or digital painting to create a unique, more personal landscape. While capturing birds through art, my gallery aims to open people’s eyes to the often-overlooked beauty all around us.” Read more. 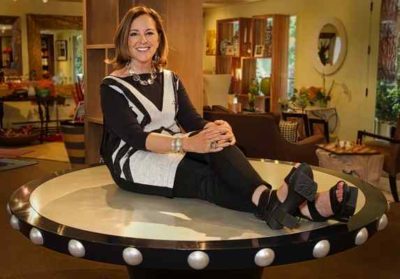 Ruth Livingston may be the only Marin County interior designer and custom furniture maker to have served as a lieutenant in the Israeli army. So how did she end up in Tiburon?

“My father was a diplomat,” she said. “I was born in Tel Aviv, grew up in Israel, spent my first two high school years in Thailand, two more in Israel, then joined the armed forces for two years of service.”

After attending Tel Aviv University for two years, Livingston completed her bachelor’s degree in linguistics after only one year at UCLA, and moved to San Francisco for the remainder of her visa. She got married in 1976, had two sons — Jordan, 35, who lives in Marin, and Michael, 33, who lives in Los Angeles — got divorced, and later earned an MBA from Golden Gate University. Read more. 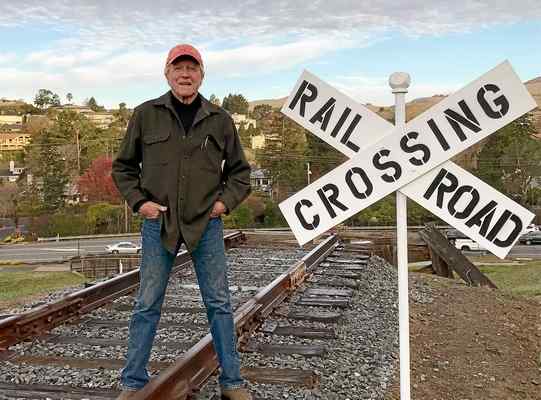 What’s going on above Blackie’s Pasture? The Tiburon Peninsula Foundation is building a trestle trail to connect residents to this area’s railroad history dating back to 1884.

“I climbed up there one day and marveled at the view,” said Jim Wood, co-founder of Marin Magazine. “There’s so much history that I thought we should also have a trail.”

That’s how the Tiburon Peninsula Trestle Trail was born, with a working committee of “The Big Four” board members that include Wood, architect David Holscher, businessman Tom O’Neill and Payton Stein. They’re managing it with historian Phil Cassou. Read more. 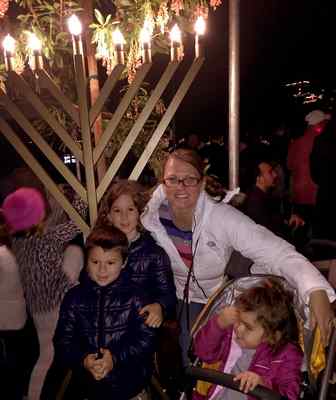 A large menorah was prominently displayed at Tiburon’s downtown Christmas tree-lighting ceremony Dec. 2, but when it vanished after that night many residents wondered why.

Had it been stolen for someone’s personal Hanukkah celebration? Was one of Santa’s elves playing a practical joke?

Nope. The menorah, which had been borrowed by Councilwoman Holli Thier from a temple in San Francisco for that one night only, was returned after the Tiburon event. But the Nextdoor social media site was abuzz. Read more. 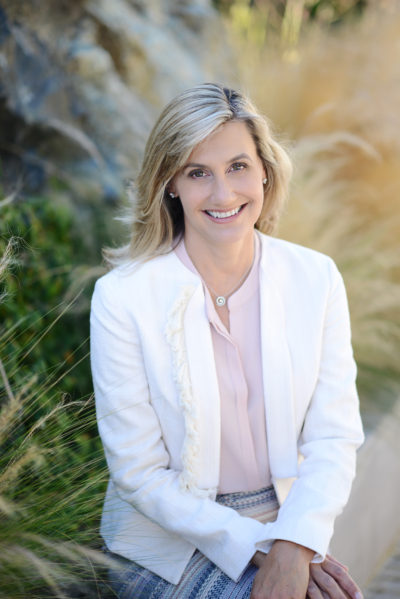 Kathryn Ellman of Tiburon greatly expanded the Reed Elementary School food drive program last year because she wanted to educate the community about the reality that one in four people in San Francisco and Marin face the threat of hunger.

Since then, she’s rallied families to donate canned goods and non-perishable items a few weeks before Thanksgiving, then hosted the two-hour volunteer shifts for two Sundays in December at the SF-Marin Food Bank’s warehouse in the city. Read more. 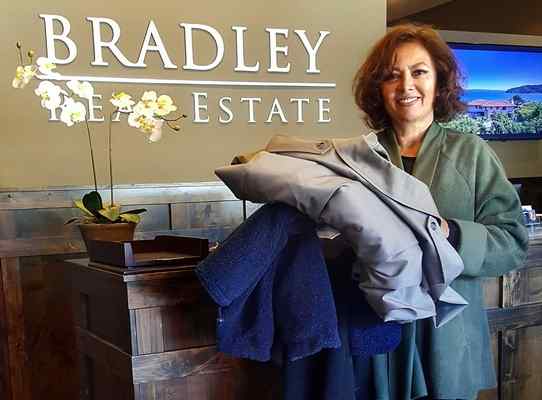 After seeing One Warm Coat collection bins when she was living in San Francisco years ago, Lorraine Gemigniani started collecting coats from her Russian Hill neighbors. Her joy of giving grew each year, so when she saw the need in Marin County she spearheaded a campaign in 2010.

The campaign is part of the national nonprofit organization’s annual drive and Gemigniani, of Tiburon, is among some 3,500 One Warm Coat organizers across the country, including others in Marin. Read more. 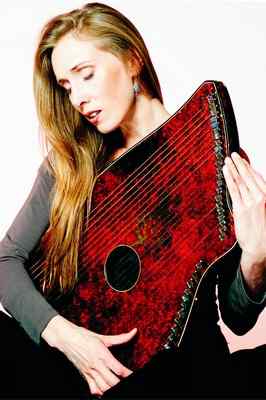 Caroluna Michelson looks more like a European runway model than an opera singer. She’s both, but didn’t discover her love for opera until she was in her 40s and raising three children.

After graduating from high school in Danville at 16, she moved to New York to model with Ford Models. Antonio Lopez, a fashion illustrator (who discovered Jerry Hall, Grace Jones and Jessica Lange) discovered Michelson. After less than a year in Manhattan, she flew to Paris to work as a photo and runway model. She lived there 13 years, marrying first a French man, then an Austrian.

Though modeling paid the bills even after she had kids, she was always singing and songwriting to fulfill her creative expression. Read more. 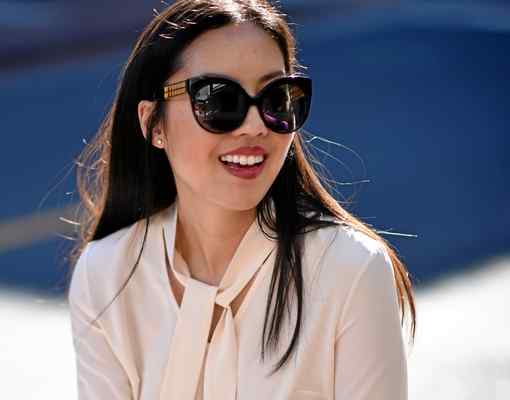 When Anh Sundstrom of Tiburon was marketing medical devices for spine surgery, she wanted to express her own brand of style. In 2011, she dedicated herself to blogging three times a week on her own time to appeal to other working women through 9to5chic.com.

Her passion became more than just a hobby after signing her first paid project for the blog in 2012. After giving birth to her daughter, she continued building her personal-style diary from her Tiburon home. By focusing on what she’s wearing and why she’s wearing it, her blog became one of the first successful fashion resources among millions. Read more. 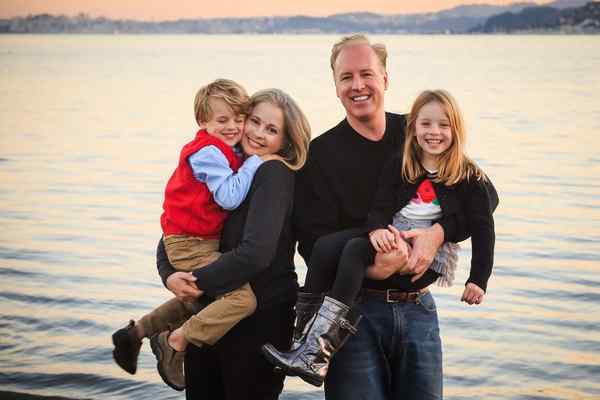 Charlotte Doyle lived in Tiburon for 20 years. In June 2015, she and her husband, Jon, decided to move their family of four up to the Sonoma Wine Country to live a “farm life” on some acreage.

That lifestyle suddenly ended in the early morning of Oct. 9, when the Tubbs fire destroyed their home — among thousands of others — in the Riebli-Wallace neighborhood of Santa Rosa. Read more. 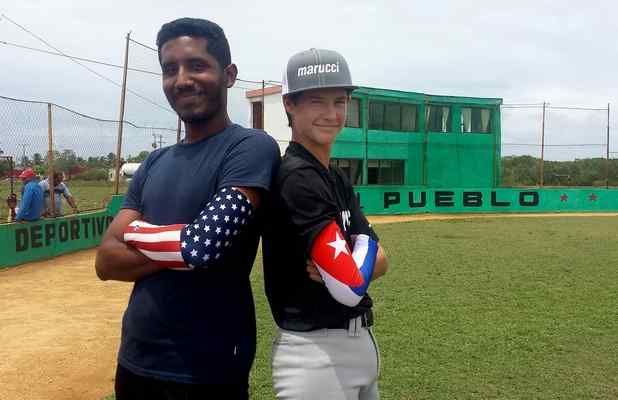 Tiburon teen Jake Nordstrom loves baseball, and he was so inspired after a recent trip to Cuba that he launched an Eagle Scout project with a GoFundMe campaign. His high-reaching goal: bring a high school baseball team and its coaches to the Bay Area by June 2018.

“Over the summer, I took a 10-day trip to Cuba with my family and two classmates,” said Nordstrom, 16, a junior at Redwood High School. “This trip began as a community project but it changed my life. The lessons I learned will stay with me forever. Read more. 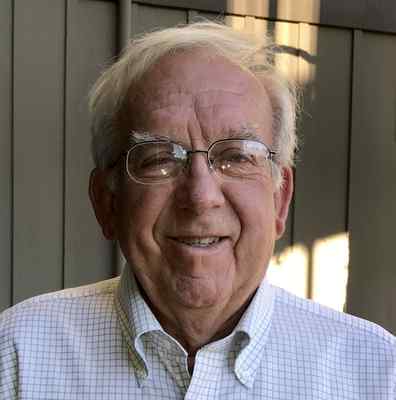 I’m new to Tiburon. So when I first met Gary Widman, one of my neighbors, I thought he was a pretty interesting character.

Why? It wasn’t just one thing … it was a handful.

• First, maybe I was impressed that he’s lived in Tiburon for 40 years after growing up on a Nebraska farm and serving as an officer at the Benicia Arsenal.

• Second, he was the general counsel for the Council of Environmental Quality in the Nixon and Ford administrations, where he helped shape the environmental impact statement process and worked with Congress on new environmental laws. Read more.