By Gil on October 12, 2007 in Magazine Articles, Portfolio

I love writing about travel. It started and continues with the 25+ published articles in newspapers, dive magazines and online media shown below. I’ve also been the Editor-in-Chief of the upscale travel, food, wine and shopping blog at Vagablond.com, where I published nearly 1,500 articles… 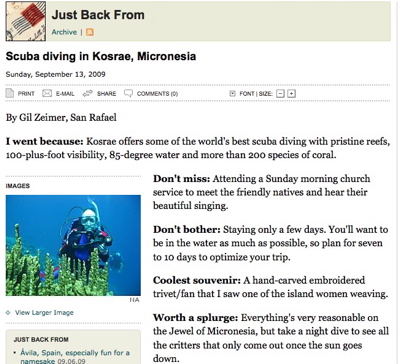 This story by Gil Zeimer and photo by Doug Beitz of Kosrae Nautilus Resort appeared on 9/13/09 in the SF Chronicle’s “Just Back From” column in their printed and online travel sections. Read this article. 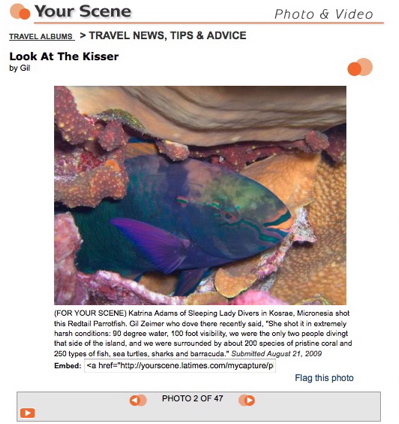 This story by Gil Zeimer and photo by Katrina Adams of Kosrae Village Ecolodge appeared in the Los Angeles Times Travel Section’s “Scene Online” on 8/21/09. Read this article.

I’m proud to be a regular contributor to Dive Pacific Magazine in New Zealand and Australia. 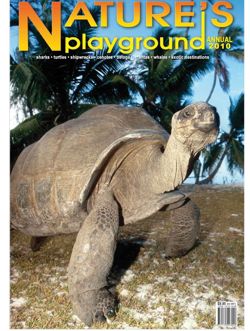 Nature’s Playground 2010 Annual from the editors of Dive Pacific Magazine. “Kosrae, Untapped Pacific Gem” by Gil Zeimer, Travel Writer is featured on pages 107, 108 and 109 of the 10th production of this slick, coffee-table quality magazine featuring articles about sharks, turtles, shipwrecks, cenotes, belugas, mantas, whales, and exotic destinations across the globe.

The February/March 2009 issue featured a story called “The Day I Rode A Manta Ray: An Ecologically Incorrect Thing I’ll Never Do Again.” Read the article (pdf).

The December 2008/January 2009 issue printed an article that’s a bit of a stretch for a diving magazine, but that’s why I’m proud to have placed it there. It’s called “Heavy Breathing on Half Dome —- And Other Ways To Stay In Shape For Diving.” Read the article (.doc).

My first article in Dive Pacific was featured in the October/November 2008 issue. It’s called “Your Gear May Be Old, But Is It Safe?”. Read it here on the DNZ Website.

I’m very pleased to have been featured in this interview by the Marin Scuba Club that tells the story behind some of my scuba articles. Read the article.

— My Dive Buddy Wears Diapers, Winter 1996, By Gil Zeimer
My dive buddy prefers warm water. So do I. Every evening around 8 p.m., we gather our gear, approach the dive site and take the plunge. Read more.

— Waterlogged Proposals, Summer 1996, By Gil Zeimer
I tried to propose to my wife underwater. She almost drowned.
While planning the moment — the commitment most men fear most — I thought this would be a romantic way to tie the knot. Read more.

— Waiting to Inhale, Spring 1997, By Gil Zeimer
I waited to inhale for 1,286 days. That’s how long it’s been since my last dive. I waited through 3-1/2 years of visiting in-laws and spending weekends in landlocked hotels. I waited. And I planned. Read more.

— The Insider’s Guide to Baja, May/June 1997, By Gil Zeimer
I was one of three contributors to this Destination X story. The following is my dive briefing and live-aboard experience.
Download the PDF version or Read more.

— Family Planning, July/August 1997, By Faith Mulvihill & Gil Zeimer
A guide to setting up your dive vacation and bringing along the whole family.Read more.

— The Sun Also Burns, May 2001, by Gil Zeimer
Barbecued ribs. Braised shoulders. Baked legs. These sound like summer grilling choices, but they’re really describing the effects of the hot sun on your skin – if you don’t take precautions with sunscreens and protective clothing. Skin cancer is something that all divers should think about. Read more.

— Low Anxiety, June 2001, by Gil Zeimer
What’s round, midnight blue, 1,000 feet/308 meters wide, and over 400 feet/123 meters deep? The Great Blue Hole of Belize, one of the world’s foremost dive destinations. It’s a spectacular underwater cavern where I got “narked”, ran out of air, and broke my watch 130 feet/40 meters below the warm Caribbean waters. Download page 1 PDF. Download page 2 PDF. Or read more.

— To Dive Or Not To Dive, April 2002, by Gil Zeimer
I hadn’t been underwater in a few years, so I’m always more cautious on my first dive of a trip. This day, the wind off the Florida coast in late February was gusting to 20 mph, the seas were rolling with 3-4 foot waves, and water temp was 74. I jumped in to follow a divemaster and 6 divers to a depth of 85 feet on a drift dive. Read more.

— Equipment Upgrade 2.0, May 2002, by Gil Zeimer
Most of us don’t even think twice about upgrading our computers, our software, our cell phones, our wardrobe, our cars, or perhaps even our homes every two to 10 years. But when did you last consider upgrading your essential dive gear? Our equipment allows us to breathe, stay neutrally buoyant, and explore underwater. Maybe it’s time you seriously considered replacing some or all of it. Read more.

— So, You Can’t Make The Reef, November/December 1994, by Gil Zeimer
I became the poster child for Murphy’s Law at the Great Barrier Reef. I assumed the world’s largest living thing would be easy to visit. I assumed wrong. Four of my five planned dive days were canceled. Read more.

— Dancing To The Humpbacks’ Song
While on my honeymoon, I fell in love with another man. So did my wife. We’re not even swingers.
He was a big fella – 45 feet long, 30 tons, and had a beautiful voice. Though he was three or four miles away, I heard him singing when I went scuba diving at Ka’anapali Beach at Maui’s southern shore. Later, we both listened to his haunting calls from a mere 200 hundreds yards as we snorkeled on a whale-watching cruise near Lahaina. We actually felt the sound vibrations reverberate through our bodies. It was like getting splashed with a liquid wave of sound. Read more.

— M-I-C-K-E-Y S-C-U-B-A
I met Walt Disney in 1956 in Anaheim. Forty years later, I never imagined that I’d dive in his aquarium in Orlando, Florida.
My secret entry key was Walt Disney World’s EPCOT Dive Quest Program. Limited to eight certified divers per day, it’s a pleasantly-packaged, behind-the-scenes tour of the Living Seas exhibit, with the bonus of a 40-minute dive into the 6,000,000-gallon tank. The dive operators ask you to bring your mask and certification card. They supply everything else. Read more.

— One Roll, One Day, Underwater In Monterey
Take 100 rolls of Kodak slide film. Give one each to 100 scuba divers. Add 50-degree water, rugged cameras, thick wetsuits, masks, fins, gloves, weights, and tanks. Ask for it back in a few hours. And award the best shots with over $20,000 in prizes.
That’s what the Northern California Underwater Photographic Society’s annual one-day competition every Spring is all about.
Read more.