As a freelance San Francisco copywriter, here’s what I’ve been doing since my November 2010 newsletter: 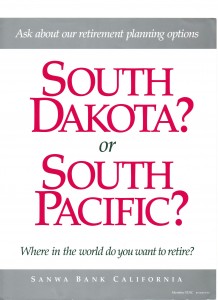 As a Certified Green Bay Area Business, I took a pledge to reduce my carbon footprint by using recycled products and services wherever possible. To that end, I’m recycling some of my past successes as a freelance copywriter in each of these newsletters. Here’s an example: Sanwa Bank In-Branch Retirement Account Poster.

I wrote this counter card for Sanwa Bank through a small design agency in Marin County about 10 years ago.

Other components included a “How to Retire in Style” brochure with Sanwa’s Guide to investing for your future, plus a campaign of teller buttons, direct mail and duratrans posters with variety of enticing and creative headlines, including:
“Peoria or Paradise?”
“Hackensack or Hawaii?” and
“Worried or Well-Off?”

About six months ago, I was introduced to a manager at Intuit through a Craig’s List ad. My success with writing dozens of blog articles led to the opportunity to write a larger project.

I’m proud to announce that The Intuit Small Business Dictionary now features definitions for over 250 terms and phrases that any small business should know, defined and explained in plain English.

When you visit the Intuit Small Business Dictionary, you’ll be able to find out the difference between SEM and SEO; Long-Tail Keywords and Short-Tail Keywords; Drupal, Joomla and WordPress; Guerrilla Marketing and Mobile Marketing; and many, many more small business terms.

The Darwin Awards for 2010 – a tip of the hat to my Texas friend, Ed Henckel, whose sense of humor is a bit sicker than mine! Yes, it’s that magical time of year again when the Darwin Awards are bestowed, honoring the least evolved among us. ?Here is the glorious winner:

1. When his .38 caliber revolver failed to fire at his intended victim during a hold-up in Long Beach, California, would-be robber James Elliot did something that can only inspire wonder. He peered down the barrel and tried the trigger again. This time it worked.

And now, the honorable mentions:
2. The chef at a hotel in Switzerland lost a finger in a meat-cutting machine and after a little shopping around, submitted a claim to his insurance company. The company expecting negligence sent out one of its men to have a look for himself. He tried the machine and he also lost a finger… The chef’s claim was approved.

3. A man who shoveled snow for an hour to clear a space for his car during a blizzard in Chicago returned with his vehicle to find a woman had taken the space. Understandably, he shot her.

4. After stopping for drinks at an illegal bar, a Zimbabwean bus driver found that the 20 mental patients he was supposed to be transporting from Harare to Bulawayo had escaped. Not wanting to admit his incompetence, the driver went to a nearby bus stop and offered everyone waiting there a free ride. He then delivered the passengers to the mental hospital, telling the staff that the patients were very excitable and prone to bizarre fantasies. The deception wasn’t discovered for 3 days.

5. An American teenager was in the hospital recovering from serious head wounds received from an oncoming train. When asked how he received the injuries, the lad told police that he was simply trying to see how close he could get his head to a moving train before he was hit.

8. As a female shopper exited a New York convenience store, a man grabbed her purse and ran. The clerk called 911 immediately, and the woman was able to give them a detailed description of the snatcher. Within minutes, the police apprehended the snatcher. They put him in the car and drove back to the store. The thief was then taken out of the car and told to stand there for a positive ID. To which he replied, “Yes, officer, that’s her. That’s the lady I stole the purse from.”?? How guilty is that guy?

9. The Ann Arbor News crime column reported that a man walked into a Burger King in Ypsilanti, Michigan at 5 A.M., flashed a gun, and demanded cash. The clerk turned him down because he said he couldn’t open the cash register without a food order. When the man ordered onion rings, the clerk said they weren’t available for breakfast… The man, frustrated, walked away. [*A 5-STAR STUPIDITY AWARD WINNER]

10. When a man attempted to siphon gasoline from a motor home parked on a Seattle street by sucking on a hose, he got much more than he bargained for. Police arrived at the scene to find a very sick man curled up next to a motor home near spilled sewage. A police spokesman said that the man admitted to trying to steal gasoline, but he plugged his siphon hose into the motor home’s sewage tank by mistake. The owner of the vehicle declined to press charges saying that it was the best laugh he’d ever had.

In the interest of bettering mankind, please share these with friends and family, unless, of course, one of these individuals listed above is a distant relative or long lost friend. In that case, be glad they are distant and hope they remain lost.

Last year, over 70% of my revenue came from referrals through Business Network International chapters in North America. The majority of my income came from my colleagues at BNI Embarcadero, the largest word-of-mouth referral chapter on the West Coast. We meet every Wednesday from 715 – 9am at L’Olivier French Restaurant, 465 Davis Court (between Washington and Jackson Streets), San Francisco, CA 94111. If you’d like to join us for a meeting, please contact me.