As a freelance San Francisco copywriter, here’s what I’ve been doing since my March 2011 newsletter: 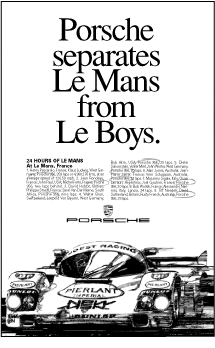 As a Certified Green Bay Area Business, I took a pledge to reduce my carbon footprint by using recycled products and services wherever possible. To that end, I’m recycling some of my past successes as a freelance copywriter in each of these newsletters.
Here’s an example: Porsche Newspaper Ad.

I was working at The Bloom Agency in Dallas. It was the day before we were making a new business presentation to Porsche Dealers of North America. While sitting on the throne, I saw a small blurb in the Sports section of the Dallas Morning News that Porsche had just won 8 out of 10 places at the 24-Hour LeMans Endurance Race.

A few minutes later, I wrote this headline, showed it to the Creative Director, and sat with an Art Director who sketched out the concept. The 8 Team Porsche drivers’ names and their times were circled in red in the original artwork. We didn’t win the account, but I’m proud to say that I created a terrific ad for an important agency presentation. 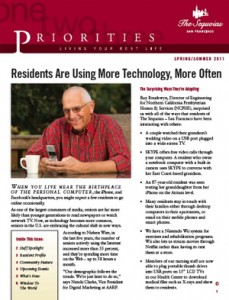 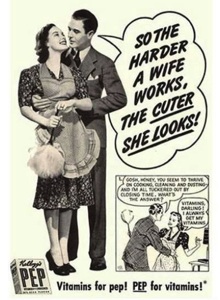 Most often, clients change a few words of a page of copy before it gets produced as an ad, newsletter, radio commercial, web page, blog, or the like. But once in a while, they rewrite it themselves because a committee within the company decided they all wanted to say they had creative input. 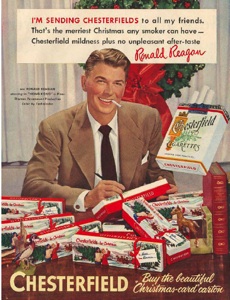 To that end, a client recently sent me this quote to apologize for a committee rewrite of a project, which turned my proposed entertaining radio scripts into something far less fun: “A committee is a cul-de-sac down which ideas are lured and then quietly strangled.” – Sir Barnett Cocks, British politician

For more advertising humor, here are some actual ads from the 1950s when vitamins were full of pep, doctors were promoting smoking, movie stars were telling you to send cartons of smokes for Christmas, and kids were used in gun ads. Download PDF of “Never to be Seen Again Advertising of Yesteryear”.

Last year, over 70% of my revenue came from referrals through Business Network International chapters in North America. The majority of my income came from my colleagues at BNI Embarcadero, the largest word-of-mouth referral chapter on the West Coast. We meet every Wednesday from 715 – 9am at L’Olivier French Restaurant, 465 Davis Court (between Washington and Jackson Streets), San Francisco, CA 94111. If you’d like to join us for a meeting, please contact me. Speaking of referrals, I received some recently for possible projects with a few technology companies, an insurance broker, and a financial institution. Gotta love those referrals!