What’s New?
Recycled Creativity
A Recent Success Story
Humor Is A Funny Thing
Ads I Like
Why I Love Referrals
About Zeimer’s Advertising Shoppe

As a freelance San Francisco copywriter, here’s what I’ve been doing since my June 2011 newsletter: 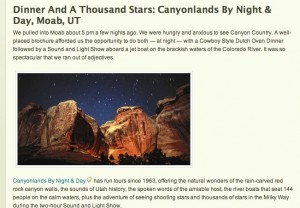 Here’s an example: “Dinner And A Thousand Stars: Canyonlands by Night & Day, Moab, UT”  from Vagablond.com.

In all, I wrote over 1,400 articles for this luxury travel blog that covers food, wine, travel and shopping. This one in particular is one of my favorite articles. It begins: “We pulled into Moab about 5 pm a few nights ago. We were hungry and anxious to see Canyon Country. A well-placed brochure afforded us the opportunity to do both — at night — with a Cowboy Style Dutch Oven Dinner followed by a Sound and Light Show aboard a jet boat on the brackish waters of the Colorado River. It was so spectacular that we ran out of adjectives.”

Read the article on Vagablond.com. 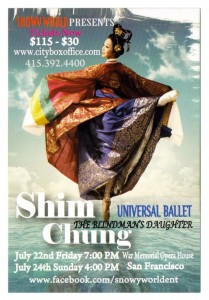 As mentioned above, I recently wrote radio scripts for the Universal Ballet of Korea and its once-in-a-decade visit to San Francisco to present “Shim Chung, The Blind Man’s Daughter” at the War Memorial Opera House in July.

I wrote :15, 30 and :60 commercials that were produced by two radio stations: KCBS and KDFC. Ellen Young, a freelance media buyer and planner, purchased the time and negotiated the rates.

As a long-time golfer, I enjoy hitting the links once in a while with my brother and some friends.

While I try to make the most of my humble abilities, I also try not to think too much about all the different things I’ve been told by golf pros, well-meaning friends, or those who are skilled at executing all types of shots, such as: Balance, focus, tempo, the grip, swing down, rotate and release hands, don’t get handsy, drive down and through, flat left wrist = straight shot, et. al.

This sketch says it all and is titled “1.5 seconds of thought”.

This 30-second TV European commercial was supposedly banned because it poked fun at the age-old assumption that blondes are dumb. But it is very, very funny. Watch it now.

Last year, over 70% of my revenue came from referrals through Business Network International chapters in North America. The majority of my income came from my colleagues at BNI Embarcadero , the largest word-of-mouth referral chapter on the West Coast. We meet every Wednesday from 715 – 9am at L’Olivier French Restaurant, 465 Davis Court (between Washington and Jackson Streets), San Francisco, CA 94111. If you’d like to join us for a meeting, please contact me.

Speaking of referrals, I received some recently for possible projects with some potential clients outside of and within my chapter.

Zeimer’s Advertising Shoppe is an award-winning writing consultancy and ad agency. As a freelance San Francisco direct response copywriter, email and newsletter copywriter, website copywriter, and healthcare copywriter, I create content for ads, brochures, direct response/email campaigns, radio and TV scripts, White Papers, newsletters, and more. My Media Department offers freelance media planning and buying capabilities For more information or to receive an estimate on your next project, contact me via email or call 415.491.1058.